netboot.me is a service that allows you to boot nearly any operating system or utility on any computer with a wired internet connection – without having to know ahead of time what you’ll want to boot.

netboot.me works through the magic of netbooting over http. There are a number of ways to boot a computer with netboot.me. The simplest is to download a bootable image, which is 626Kb and burn it to a CD or put it on a USB memory stick, or floppy disk. Boot off it on any networked computer, and it will automatically fetch the latest boot options from netboot.me and let you choose from dozens of installation, recovery, testing, portable desktop and other tools. You can also start netboot.me from any computer running gPXE, or from any netbootable computer with some simple tweaks to your DHCP server. 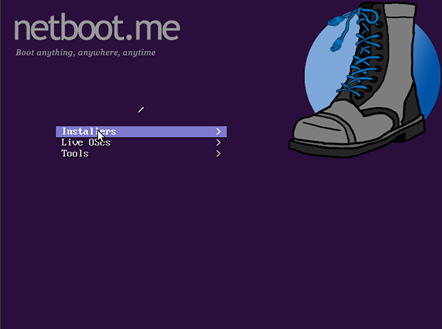 I just tested it and it works beautifully. It seems to update it’s menu system from it’s website each time it boots, so it’s always fresh. Currently in the menu, the following are available:

Anyway, I grabbed Micro Core and on my 1024kbps connection, it was booting in about 30 seconds and I had a runnning linux distribution.