I haven’t spent much time with Video editing / DVD authoring on either Linux or Windows. Mostly because I don’t watch much video except for a wierd philia for watching Cop Chases on Youtube or at the other end of the spectrum, watching the extremely interesting TedTalks using Miro or Google Tech Talks.

Anyway, my sister-in-law purchased a Mini-DVD Sony camera. It just so happens that Linux doesn’t support this format at the moment (though Windows 2003 doesn’t natively either), so be warned. Anyway, we managed to use Sony’s software to dump it to a Windows 2003 server and pulled it across to my Ubuntu machine. All I wanted to do was to grab these 5 movies and put them into standard DVD format. I wanted to do both PAL and NTSC because these DVD’s are going to South America and although they use NTSC there, it’s nothing to burn both just in case there’s some issue with one or the other.

So.. how hard could it be to do this? It turned out to be quite difficult using the Linux tools I could find..

First, I came across a post that uses DVDStyler, it’s not in Ubuntu repo’s but they have some deb packages so I download and install them. They are only in i386 architecture, so I –force-architecture and they install. Go to load it and I get this:

It’s claim to fame? A script to transform PC multimedia file(s) in any format, into a DVD complete with menus & suitable for playback on a standalone DVD player.

Again, I have no desire to go debugging this or reporting a bug and waiting for an answer. I just want something that works, tonight and gives me what I want.

I read a bit about dvdauthor and it seems like it’s a bit more mature (and has 1000 options like most video editing apps) and see there’s a gui for it also called Qdvdauthor AND it’s in Hardy’s repositories, so I apt-get install dvdauthor qdvdauthor.

Kick off qdvdauthor. Ok, this loads and looks fine. I go to add the video files as suggested.. All the thumbnails read “Error” . So I hit the website, find the forums and lo and behold.. I find this post describing my issue.

I really don’t feel like compiling both from source, so it’s about 10:15pm now. I decide that I have been defeated due to lack of time and my trusty Linux desktop just can’t achieve such a task easily, so I decide to look for a Windows application that can do what I need. If you have never seen it, the website “The Free Country” is generally a trusty website to find good, free tools. So I thought.. why not try and run one of these under wine. So, I download two of them. Video DVD Maker, which installed but didn’t run and then I installed DVD Flick, which is actually an open source project host at Sourceforge. DVD Flick installed and ran perfectly on my Ubuntu 64bit Hardy Heron. I selected it to create an ISO file which I then burned using Brasero. DVD Flick is as simple as you can get, load it, select your video files, add a few titles if you like and away you go. by 11:15pm I had my DVD playing on the DVD player.

An ironic sidenote is that DVD Flick installs ffmpeg.exe and uses the cygwin.dll to call it. Using wine to call cygwin to emulate linux – crazy.. but it works. 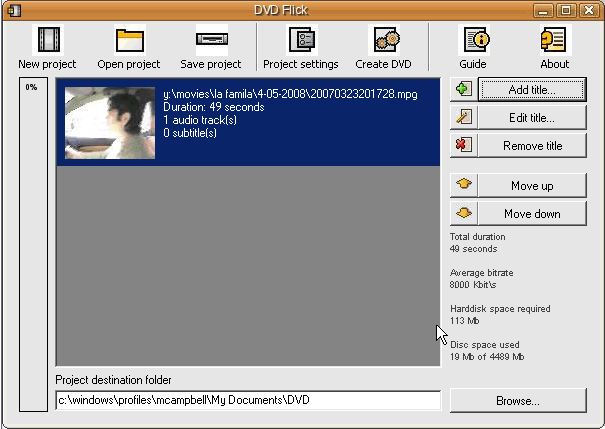