Wow.. a great week it has been in the enterprise Linux world.

Last week, we had:

and while it’s not truly open source, NoMachine released V3 of their NX server and finally, they have introduced

Now, if your an admin, it’s a no-brainer to set it up – you can either do it from NX Manager (make sure you have V3 also) or you can edit /usr/NX/etc/server.cnf

You can checkout all the directives from the Admin guide at this link.

And here’s what the Administrator’s Guide says:
The desktop sharing and session shadowing functionalities are enabled in the default configuration of the server. Desktop sharing allows the sharing of any of the native displays on the node, while session shadowing allows the sharing of any of the NX sessions running on the node. By default, it is up to the owner of the native display or of the master session to accept/deny the user’s request to attach to the display/session.

If I try and login to an existing session, it logs off the original user and logs in the one trying to login.. so wtf?

I have read the docs – oh, I had to google for the page that lists all the docs, so here they are.

Additionally, I personally think the US $750 for the Small Business Server is a little too high as an entry point – or at least expand the free server beyond 2 licenses..

Even a 5 user (+ pay-per-incident support) for $300 would likely make NX a more palatable option for young startups or those wanting to offer a SAAS setup.

At the moment, I am just keen to find out how to test the mirroring or grabbing a console… anyone??

OK, I worked this out: 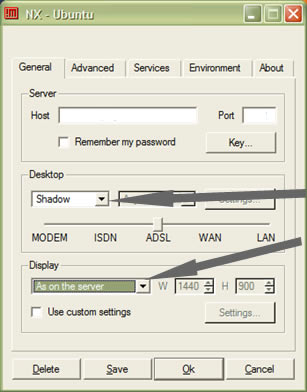 Then, when you start the session, it will display the sessions that are available to connect to – the default setting is to prompt the user to authenticate you. To change this, edit using:

I restarted the nxserver daemon just in case, which will disconnect your NX session if you are connected already.

BUT – the problem I had is that my remote screen resolution is 1440×900 and my local screen resolution is 1280×1024 – so when I try and connect to my local console, NX fits the width in the 1280px by squashing up the 1440 remote image, which presents a barely readable screen – and it makes the height 900px leaving a gap (which is no big deal). It also seemed much slower than a regular nx session.

I will keep playing around but I will probably stick with my current: pkill <program> setup.